Developer and publisher Epic Games is set to challenge the mighty Steam Store with its own digital storefront called Epic Games Store. Epic Games announced its plans today in a press release.

The ambitious initiative is backed by Fortnite’s massive success. The free-to-play Battle Royale game reached a milestone of more than 125 million registered players in just a year since its launch. Epic is riding on the success of Fortnite to make its wildest dreams come true, such as this digital store.

The highlight of the announcement is how Epic will run things on its digital store. Epic is promising to give a 88% percent revenue to developers for earnings through the store, thus, bringing Epic’s share to 12%. Epic will even waive off the 5% engine royalty fee out of the 12% if the game utilizes the Unreal Engine 4. 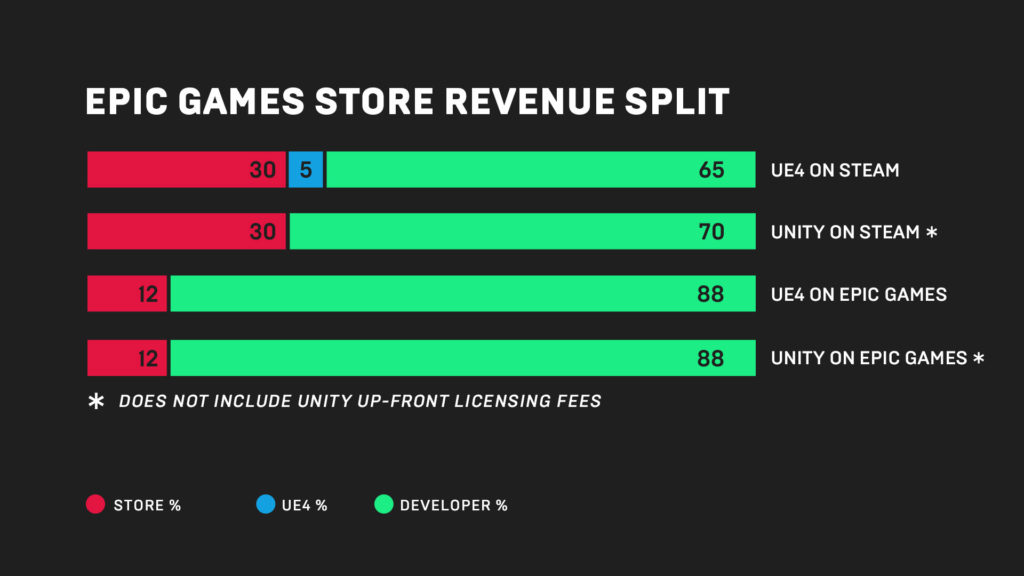 “As developers ourselves, we wanted two things: a store with fair economics, and a direct relationship with players. And we’ve heard that many of you want this too!”

Epic’s founder, Tim Sweeney, spoke to Game Informer in an interview about the current economics of digital stores like Steam, Apple’s App Store, and Google’s PlayStore. All the aforementioned stores operate on a “70/30” policy, meaning that store owners get 30% of the revenue from sales. Although Valve introduced 75/25 and 80/20 revenue percent tiers that are based on sales.

Epic is putting word out that it wants what’s best for the developer and help them grow. The new store gives the Epic Games store a clear edge over Steam Store when it comes to giving back to developers.

The decision to launch its own digital store provides advantages which Epic outlined in its announcement.  The first is about having a direct relationship with players. Developers can communicate with players who have purchased their game via newsfeed. Developers can push important news like game updates and upcoming releases.

Equally as important as receiving more share per game sold, developers will get to own their game page. That means they control the news feed and there shall be no competitor ads running on the game page. Moreover, the store welcomes all engines to the platform.

It’s all very promising, especially for the developers, but climbing the mountain known as Steam’s popularity is a huge challenge at hand. Nevertheless, competition only means good things for the customer.